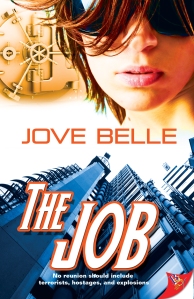 “How long have you been with Tara?”

That’s the first question people usually ask about my relationship. When I respond, “Twenty years next summer” the next question is invariably:

For the majority of our relationship, nobody asked that. Or if someone did, it was understood the question really being asked was if we’d had a ceremony sans the legal entanglements that come with marriage. If it ever came up, I’d shrug and say, “What’s the point?”

Since the laws regarding same sex marriage changed in Washington state, that answer just doesn’t cut it. For a lesbian couple who have shared almost two decades and several children, the expectation is that we rushed off to get married the second it became legal. Except we didn’t.

Now, I joke about her refusing to marry me. Then the subject is awkwardly and pointedly dropped.

The last time I was asked that question, I was at a book event, surrounded by other authors, the majority of them write lesbian romance like me.

In a romance novel there is only one goal: Happily Ever After. My books are no exceptions. Just like real life, what happily ever after looks like varies with each couple. Not everyone follows the same road or ends up in the same place. Marriage, even when it’s legal, isn’t always the final destination.

No matter what else happens in our lives, we all share the universal search for love. It doesn’t matter if you’re a CEO or a farmer or a bus driver or a skate park attendant or an heiress or a… you get the point, everyone is desperate for a little romance.

That craving for love is why I write romance. As a writer, I get to explore all the possibilities. I get to put together people that may not appear to match on the surface, but ultimately belong together. And I get to define what happily ever after looks like for all of them.

If I do it right, other people read and enjoy the story when I’m done.

August is Read-a-Romance Month. There’s an entire website dedicated to it, in fact. For the entire month, three romance authors each day are blogging about all things romance. August fifth is dedicated to gay and lesbian romance authors specifically. Drop by and check out blogs from both Radclyffe and D. Jackson Leigh.

As part of Read-A-Romance Month, authors are being asked the following questions:

The most daring thing I’ve ever done, though I didn’t realize it at the time, was have children. They changed everything about my life.

This question…god, I’ve answered it so many times, but it never really gets old. I’ve always, for as long as I can remember, planned to write a book. It was on my list of “Someday I’ll do that.” Then, one day at work, a friend/co-worker told me about a book she had written. That moment was a catalyst for me. I realized that I was waiting for “someday” and it was already here.

Wow. How can anyone pick just one book? Again, wow. If you read regularly, as most authors do, this question is impossible to answer without it turning into a pages long ramble about countless books. THE book changes with the seasons of life. Something that seems so defining loses it’s place for the next book that helps you through a difficult time. With that in mind, I’m going to pick one, but it’s not any more important than the other. 🙂

I read Fried Green Tomatoes at the Whistlestop Cafe by Fannie Flagg years after I first watched the movie. The movie was empowering and spawned a lifelong crush on Mary Stewart Masterson. I also developed an inexplicable desire to charm bees. Unlike the movie, the book seduced me with the pacing, the story telling, the incomparable voice. It’s a story of life in the South, but more than that, it’s about love that lasts a lifetime. Who could possibly resist that kind of story?

Now for the fun part! I get to recommend a couple of other romance authors who I love to read.

First up, the fabulous Gill McKnight. She’s the author of the paranormal series about the Garoul family, as well as several stand alone romances. Gill has wonderful comedic timing and a wicked sense of humor. Check out her website HERE!

Next is a relative new comer to the world of publishing, Ashley Bartlett. She has a website, which you can check out HERE. Ashley wrote a clever, edgy series of books called the Dirty Trilogy (AKA, the Dirties). She’s one of my favorite young writers and I hope she keeps writing for a long time to come.

One thought on “In search of Happily Ever After”